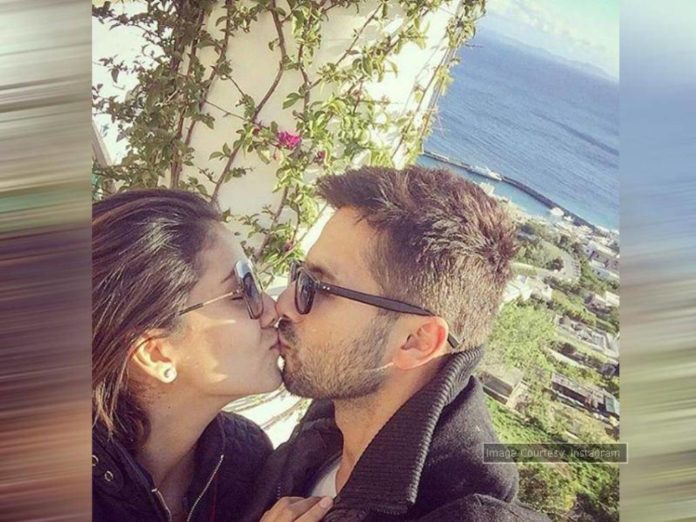 Bollywood’s most charming couple, Shahid Kapoor and Mira Rajput celebrated their first wedding anniversary yesterday, on July 7. The soon-to-be parents reportedly rang in their first anniversary at the hospital, where Mira is currently admitted. Shahid, we hear, hosted a special dinner for his beloved wife at the hospital itself and invited a few close friends over. The ‘Udta Punjab’ actor also took to his Instagram account to share a rather cute picture of himself with his wife Mira, which he captioned, “Happy first anniversary my love. @mira.kapoor you are my sunshine.” Aww! aren’t these two absolutely adorable? Shahid Kapoor and his wife, Mira Rajput reportedly celebrated their first wedding anniversary in the hospital last night. The couple is expecting their first child in September due to which Mira has been admitted to the hospital for regular check-ups. Shahid visits his wife ever so often and has been keeping her company like a doting husband. Reportedly, since Mira is currently in the hospital, Shahid arranged for a special anniversary dinner for her in the hospital itself. The dinner included all of Mira’s favourite food. A few close friends were also present to keep the couple company. Reports also state that Mira will soon be discharged from the hospital. However, there is no official confirmation about the same. Nonetheless, we wish the lovely couple a very happy wedding anniversary!

This is how Shahid Kapoor pampers pregnant wife Mira Shahid Kapoor and Mira Rajput are one of the most adorable B-Town couple. The duo will be turning parents this year. The ‘Udta Punjab’ actor is spending all his free time with his pregnant wife, he makes sure she is given immense love and care. The doting husband, who had taken Mira to an exotic babymoon to Maldives some weeks ago, revealed that the most romantic thing he has done for her is braiding her hair. Shahid Kapoor and wife Mira Rajput are expecting their first baby and the couple couldn’t be happier. Mira is currently in the third trimester of her pregnancy and the baby is expected to arrive sometime in mid-September. Keeping in mind that this is their first child together, Shahid, we hear has been keeping a close eye on Mira, who is just 22-years-old. A source told Mumbai Mirror, “She (Mira) has started getting cravings for particular kinds of food and he makes sure to indulge her.” The source further added, “He (Shahid) has also been accompanying her for visits to the doctor and when they are out, he doesn’t let go of her hand or leave her side.” Aww…how adorable are these two! Parents-to-be, Shahid Kapoor and Mira Rajput are on their babymoon in Maldives and are spreading the word loud and clear. After Shahid returned from the shoot of Vishal Bhardwaj’s ‘Rangoon’, he filled in for his prior absence by taking wifey Mira on an exotic vacation. Well, the B-town couple has all the reasons to celebrate. Shahid shared a video on his Facebook profile of their boating stint during their vacation and the two indeed look happy. The actor had confessed during the trailer launch of his upcoming film ‘Udta Punjab’ by announcing to the world “haan, main baap banne wala hun,” after the rumours of Mira’s pregnancy started doing the rounds in the media.

Shahid Kapoor and his wife Mira Rajput on a holiday The soon-to-be parents, Shahid Kapoor and Mira Rajput are on a much-deserved vacation. The lovely couple had tied the knot in July 2015 and are known to send the paparazzi into a frenzy every time they step out together in their signature hand-in-hand pose. While the media was busy speculating about Mira’s pregnancy after she was spotted flaunting her baby bump at an event, Shahid, amidst the presence of his ex-girlfriend Kareena Kapoor, admitted that he was going to be a father soon, during the trailer launch of ‘Udta Punjab.’ After wrapping up the shooting of his upcoming films, Shahid took time out to be with his beautiful wife, and the duo headed for a long drive. The ‘Rangoon’ star took to his Instagram to share a pic and captioned it, “Drive time with Mrs Kapoor. #holidayvibes.”

While speculations and rumours around Shahid Kapoor’s wife, Mira Rajput’s pregnancy have been doing the round for weeks now, the couple had maintained silence on the issue until now. At the recent launch of his upcoming film, ‘Udta Punjab,’ where the actor shared stage with Kareena Kapoor, Alia Bhatt and Diljit Dosanjh, Shahid finally chose to comply with their curiosity around Mira Rajput’s pregnancy and came out in the open. From what we hear, the Kapoor family is excited to welcome their first grandchild. Naturally, Mira has become a centre of everyone’s affection and is being pampered big time. Our congratulations and best wishes are with the happy couple!

A few days ago, we came across a picture of Mira Rajput which sent the whole nation into a tizzy, courtesy, the little bump the girl was sporting. Naturally, rumours of Mira’s pregnancy picked up a pace. What further added fuel to this fire was friend and designer, Masaba Gupta’s cryptic Insta post which read, “Two M’s and a Bum #sayheytobey – little M.” While Masaba has refused to speak up any further or explain her post, a source close to the couple has confirmed to Mumbai Mirror that the duo is, in fact, expecting a baby. The source also informed Mirror that “she is in her second trimester, halfway through her pregnancy.”

Shahid Kapoor – Mira Rajput off on a birthday vacation Happy Birthday Shahid Kapoor! The handsome hunk of B-Town turns 35 today on February 25, 2016 and this is his first birthday as a married man. While recent rumours suggested that for his special day, wife, Mira Rajput had planned a surprise party for the actor with close friends and family, the two have, in fact, taken off to an undisclosed destination to spend the special day together. A close friend of the couple informed Mumbai Mirror that the two wanted to spend some time by themselves and so have taken off. “They are in India, somewhere up North, because Shahid is in the middle of a hectic shoot for Vishal’s (Bhardwaj) ambitious love story set against the backdrop of the Second World War, ‘Rangoon’. In fact, he flies off to Arunachal Pradesh, where the unit is moving next after a grueling schedule in Mumbai, directly from the birthday break,” said the source. We, hope the two have a great time together! Shahid Kapoor is on a photo sharing spree these days. He has yet again shared a picture of himself, along with wife Mira Rajput, straight from his wedding album. In the picture, Mira is sitting while Shahid is seen to be standing beside her, playfully poking her nose. The picture looks so adorable, with Shahid Kapoor playing the naughty husband and wife Mira’s instant cute reactions. Shahid-Mira’s chemistry is clearly evident in the picture. We wonder if the couple will make a Bollywood debut together, anytime soon.

Shahid and Mira, celebrated their first Christmas as newly weds, and boy did they look cute as hell. Mira looked gorgoues in a red top and Shahid looked every bit smashing in a black tee. Mira has cast a romantic spell on him, which doesn’t look like vanishing from the looks of it. Shahid posted the pic on his Instagram account, where he wrote, “With my Santa #happyholidays”. Bollywood’s chocolate boy, Shahid Kapoor, wowed everyone with his mad dancing skills and went on to prove his acting prowess with movies like Jab We Met and Haider, to name a few. Several media speculation and some relationships-turned-sour with famous leading ladies later, it was a pleasant surprise to see the actor settle down with someone from a non-filmy background. Here are five pictures to prove that Shahid and Mira are a match made in heaven. The couple tied the knot in a low-key affair at a Gurudwara in New Delhi on July 7, 2015. The wedding was a typical Punjabi style affair and was attended by only a chosen few. This picture, clicked during the garland ceremony, shows Mira blushing, while Shahid too, is seen smirking as he is about to put the garland around his sweetheart’s neck.