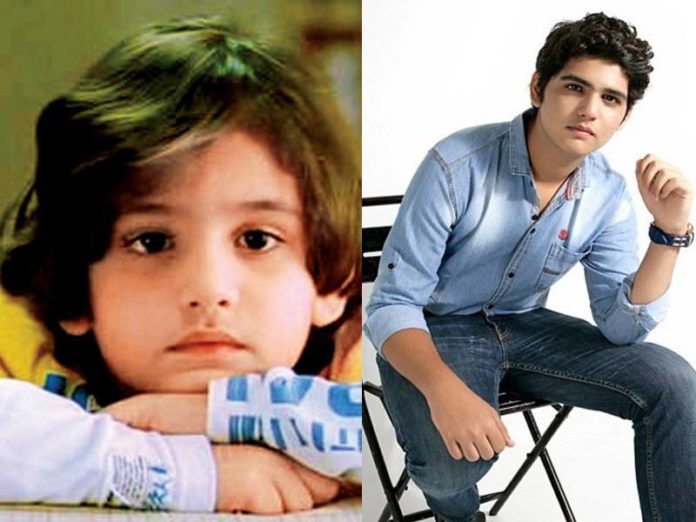 Do you remember the super cute kid who played Aamir Khan’s son Rehan in the blockbuster ‘Fanaa’? Well, the kid Ali Haji has grown up into a dashing teenager who can make girls go crazy with his cuteness. Ali is a popular child actor who featured in several Bollywood films including Saif Ali Khan and Rani Mukerji’s ‘Ta Ra Rum Pum’ in which he played their son Champ. He was also seen as Lara Dutta’s son Rohan in the laugh riot ‘Partner.’

Moving on from adorable Ali, check out another child actor who is a grown up now… Moving on, also check out how the cute sardar from ‘Gadar’ is all grown up now… Remember the cute sardar who sang ‘Udja kale kawan’ with his onscreen father Sunny Deol in the superhit flm ‘Gadar’? Well, the cutie pie Utkarsh Sharma aka Charanjeet is all grown up and raring to go. The handsome hunk is the son of ‘Gadar’ director Anil Sharma and was widely applauded for his performance in the film as a child actor. All of 26, the handsome lad may make his big Bollywood debut as a lead actor soon.

Apart from Salman Khan’s soul-stirring performance in last year’s biggest commercial hit ‘Bajrangi Bhaijaan’, someone who stole a million hearts was the angelic kid Harshaali Malhotra, who walked away with tremendous critical acclaim for her portrayal of a mute, Pakistani girl, Zahida, aka Munni. Now it seems that the adorable girl is spreading her magic across boundaries. Apparently, Harshaali has bagged a TV commercial alongside UAE’s pop star SaadLamjarred and that has left her fans pleasantly surprised. Considering how young she is, the fact that she has bagged a telecom advertisement with SaadLamjarred is proving to be a jaw-dropping and eyebrow-raising example for her fans in India and UAE. Now here’s one girl who’s surely making her ‘Maama’ Salman Khan proud of her achievements! Remember the cute little munchkin who played dapper Shah Rukh Khan’s younger brother in ‘Kabhi Khushi Kabhie Gham?’ No, we are not talking about Hrithik Roshan, silly! We meant the younger version of Hrithik in the film, Kavish Majumdar. Well, the little boy is all grown up now and also posed with his onscreen grown-up avatar, Hrithik. The actor has also worked in films like ‘Gori Tere Pyaar Mein’ and ‘Main Tera Hero.’ Remember the adorable little girl who played Tabu and Kamal Hassan’s daughter in ‘Chachi 420’? Well, she’s not-so-little-anymore and has grown up to be a beautiful woman. Her actual name is Fatima Sana Shaikh; she had also appeared as a child artiste in Juhi Chawla’s ‘One 2 Ka 4.’ And now for a surprise, the 24-year-old is all set appear in Aamir Khan’s ‘Dangal.’ The actress will be seen essaying the character of a wrestler named Geeta Phogat in the upcoming sports biopic directed by Nitesh Tiwari. ‘Dangal’ is scheduled to hit the screen on December 23, 2016. Remember that beautiful-looking seven year old from ‘Kabhi Khushi Kabhi Gham?’ Yes the one who played Kajol and Shah Rukh Khan’s son, Krissh, in the film! The very same one who gave us all goosebumps in the scene where he sang, ‘Jana Gana Mana’ for his mom! That’s the one we are talking about, Jibraan Khan. The adorable boy is now all grown up and boy is he upping the heat around here! With his heavily chiseled bod and that stubbled look, Jibraan sure is Bollywood ready. We wonder how come he hasn’t caught the fancy of any filmmaker as yet. Harshaali Malhotra played the character of a mute Pakistani girl lost in India in the Salman Khan starer, Bajrangi Bhaijaan. According to a report on Bollywoodlife.com, her role in the movie has earned her a nomination in the Best Actor Debut – Female category for the forthcoming BIG Star Entertainment Awards 2015. Harshaali is pitted against Akshara Haasan for Shamitabh, Athiya Shetty for Hero, Bhumi Pednekar for Dum Laga Ke Haisha, Sanah Kapoor for Shaandaar, and Anushka Ranjan for Wedding Pullav. The award ceremony will be held later this month. The film industry is booming with talent and what’s more surprising is that the young guns are stealing the show from the lead stars, in big films. While Harshaali Malhotra got the world talking with her cuteness in Bajrangi Bhaijaan, Naisha Khanna from the film Brothers, took the social media by a storm with her innocent look. And it’s not just the girls, there are some male child actors who have won our hearts with their performances too! While the world is going ‘aww’ over Bajrangi Bhaijaan girl Harshaali Malhotra, another cutie Naisha Khanna is taking the social media by a storm. Naisha is seen as Akshay Kumar and Jacqueline Fernandez’s daughter in the film Brothers. The little girl is a big fan of Tiger Shroff and claims to have watched Heropanti several times, reports Dnaindia.com. The six-year-old has featured in several ads including Kidzee and has also featured in some TV shows. But she reportedly wants to be a teacher when she grows up. Interestingly, she once asked Salman Khan why he is so cute, to which the Dabangg Khan replied saying that one has to be cute so that a cute girl like her can hug him. Harshaali Malhotra, who played the deaf and mute character ‘Munni’ in Bajrangi Bhaijaan, almost overpowered Kareena Kapoor Khan in the film with her cuteness and innocence. However, this talkative girl in real life, has starry dreams and has already set her stakes clear in Bollywood and television. She had even asked Salman Khan if he will make her a superstar. This seven-year-old girl has already been noticed in shows like Jodha Akbar, Laut Aao Trisha besides several commercials. Not only this, Harshaali reminded Kabir Khan of Katrina Kaif while they were working in the film Phantom. The kid with the bunny-teeth in Taare Zameen Par, brought tears in the eyes of the moviegoers with his innocence while struggling with the regular school life being a dyslexic in the film. It was every bit an outstanding act. The young winner of the most coveted Filmfare Critics Award for Best Actor, Darsheel Safary emerged as the most talented child actor in the film industry. After attaining such fame and stardom and even participating in Jhalak Dikhhla Jaa 5, Darsheel is currently a 19-year-old college student studying commerce. Well, we will wait for his next big flick. Partho Gupte, who played the cute kid in Stanley Ka Dabba, kept the cinegoers glued to the screen with his cute antics. Filmmaker Amol Gupte, who chose to direct his own son in the film, captured his innocence with utmost excellence making him win the Filmfare Special Award (Certificate) and the National Film Award for Best Child Artist. After winning millions of hearts, Partho went on to give another fantastic performance in the film Hawaa Hawaai, in which he played a poor boy who wanted to learn skating. Another one from Partho is just the one we are looking for! Parzan Dastur became a known face in every household with his ‘jalebi’ act in the Dhara commercial years ago. He is a popular child actor of Bollywood with several memorable films to his credit. From playing the cutest Sikh kid who kept counting stars in Kuch Kuch Hota Hai, to the innocent kid wielding a gun in Sikandar, Parzan has played some of the most wonderful roles with perfection. The innocent kid from Parzania has now come of age and may probably return as a young heartthrob some day, and we are sure he will give everyone a tough competition.