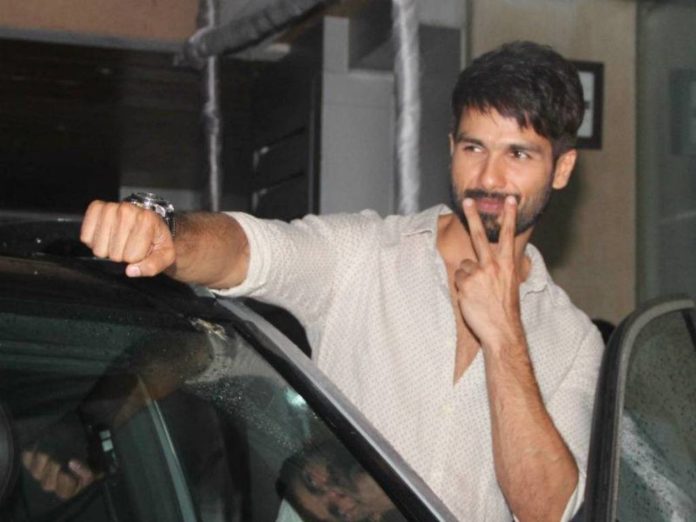 Shahid Kapoor and Mira Rajput gave birth to a baby girl on August 27. The couple was spotted exiting the hospital premises yesterday. The new father was captured by the paparazzi holding the baby firmly nestled in his arms as he took her securely inside. No one could obviously catch a glimpse of the newborn as she was wrapped in a blanket, safe in daddy’s arms. And looks like it’s going to be a while before we see a glimpse of Shahid’s baby. Reports suggest that the ‘Udta Punjab’ star doesn’t want any paparazzi limelight on his precious daughter. He’s also not interested in any kind of media tie-ups and has also allegedly refused media houses that approached him for the same.

Shahid Kapoor and Mira Rajput turned proud parents to a baby girl on August 26 at the Hinduja Healthcare Surgical hospital in Mumbai. The baby was due in September but arrived early to spread cheer in the Kapoor household. Shahid had taken to Twitter to express his joy by saying, “She has arrived and words fall short to express our happiness. Thank you for all your wishes.” Mira and baby are in good health and have been discharged from the hospital. Check out Shahid carrying his newborn baby wrapped in a cute blanket. Adorable, isn’t it? We wish the parents a hearty congratulation on the birth of their baby girl! Shahid Kapoor and Mira Rajput were blessed with a baby girl last night, on August 27, 2016. Needless to say, the happy parents are on cloud nine and dad Shahid took to Twitter to express his excitement. He tweeted, “She has arrived and words fall short to express our happiness. Thank you for all your wishes.” Mira had a normal delivery and gave birth to a healthy baby weighing 2.8 kgs. A source revealed that the new mom will be heading home after five days. Shahid will reportedly take time off work to spend quality time with his wife and baby. We wish Shahid and Mira all the love and happiness. Hearty congratulations! Shahid Kapoor and his wife, Mira Rajput are all set to welcome their first baby. Buzz has it that baby Kapoor is expected to be born around mid-September and Shahid has not taken up any new projects to be able to spend quality time with Mira. Of late, the doting husband has been posting incredibly adorable pictures with his wife on his social media accounts. One such photo happens to be that of Mira resting, and the ‘Udta Punjab’ star is seen cuddling her. Sharing the picture on Instagram, he said, “beautiful moments.” How cute are these two!

Shahid Kapoor: I always wanted to settle down and have a family Shahid Kapoor and Mira Rajput recently celebrated their first wedding anniversary and Shahid also posted a picture of her with a beautiful caption. The ‘Udta Punjab’ star gave a heartfelt interview recently in which he spoke at length about the difference Mira has made in his life. When asked about stability and marriage, Shahid said that he always wanted to settle down and share his happiness and achievements with a person and Mira has given him just that. Speaking further about the difference his wife has made in his life, the actor mentioned how he would feel bad whenever he landed in any city and nobody would ask him whether he has reached safely or not, but today he feels happy as he has someone like that around him. If these aren’t relationship goals, we don’t know what are!