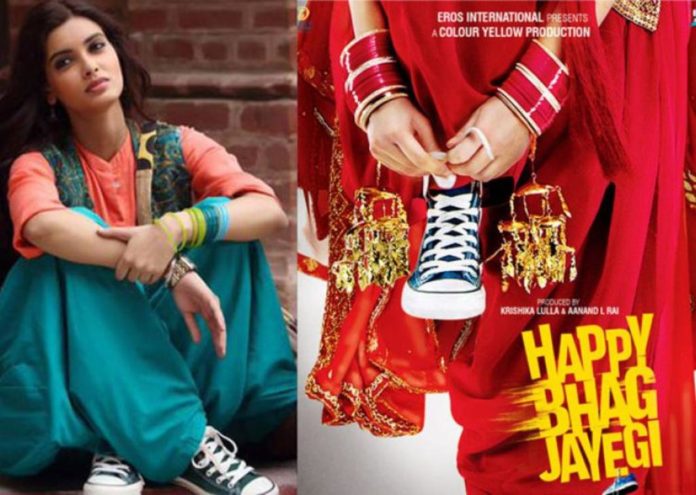 STORY: Feisty and foolhardy, Amritsari kudi Happy (Diana Penty) escapes from her own wedding to be with her beau Guddu (Ali Fazal). This infuriates her would be groom – wannabe politician Bagga (Jimmy Sheirgill). Confusion ensues when Happy doesn’t end up with either and accidentally lands up in Pakistan. She bumps into Bilal (Abhay Deol), a budding politician and sparks fly. But he is engaged to Zoya (Momal Shiekh). Who gets the girl?

REVIEW: Happy Bhag Jayegi is a fresh, light-hearted take on cross-border camaraderie that revolves around a runaway bride. It lures you into throwing logic out of the window (‘baher’) for a while as it offers clean entertainment with ample gags. The cat and mouse game between the characters, with a dash of romance, forms the story.

If you are curious to know about our neighbours and their culture, this film satiates that intrigue to a certain extent. The comic caper clicks for its situational humour, smart writing and perfect casting. The first half has tons of laugh out loud moments, predominantly stemming from Piyush Mishra speaking chaste Urdu (Javed Akhtar style).

Jimmy Sheirgill may not get the girl but he gets memorable roles and his portrayal of Bagga is the highlight here. Be it him calling Ali, Justin Byeber or saying, ‘Mere shaadi rukwane ke peeche, padosi mulk ka haath hai’, Jimmy steals the show, hands down. Both Abhay and Ali are equally competent and the men dominate the film, even more than the film’s central character (Diana), whose looks overshadow her acting. Momal is sincere.

Since the love tracks seem unconvincing and abrupt, the second half tanks a bit. The cartoonish climactic chase sequence too seems juvenile. However, overall, the family comedy manages to pull the right strings and change the present (if not the history) of Indo-Pak relations for the two hours that it lasts. Buckle up and enjoy the ride, Janaab!