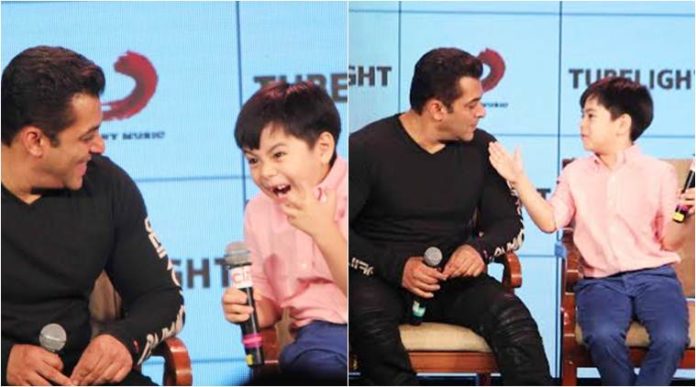 Salman Khan has been busy promoting his upcoming film Tubelight, but guess who joined him this time. It was none other than the child actor Matin Rey Tangu. Wtih his sweet adorable accent, the kid completely managed to warm our hearts. Right now we seriously couldn’t be more thankful to Kabir Khan for including him in the cast of Tubelight. Tubelight was already on our must-watch list, since it is one of the biggest releases of superstar Salman Khan this year. But now it was Matin who simply kept us on our toes.

Salman Khan is known to be great with kids, and this time, the media just got the perfect glimpse of it. The duo melted our hearts as they danced to the tunes of The Radio Song. Salman’s little co-star plays a key role in the film. The Tubelight trailer hinted it would be a heartfelt story and also the fact that Matin is of utmost importance in the plot. The film also stars Sohail Khan and Chinese actress Zhu Zhu in lead roles. But right now it was the five-year-old’s swagger and cuteness that completely grabbed our attention. Take a look at few of the most adorable moments from the promotions of Tubelights.

To welcome Indians hailing from North-East regions as if they were guests, is one of the most racist things we practice in our country. When the child actor, who hails from Itanagar, was asked about his trip in India, he replied with such maturity and utter swag.

Oh wait, the cuteness didn’t just end there, look what happened next.