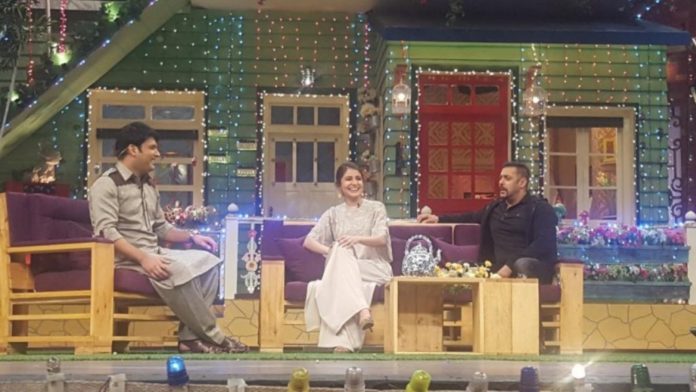 Bollywood superstar Salman Khan recently appeared on “The Kapil Sharma Show” with Anushka Sharma to promote “Sultan.” Earlier, it had been reported that the actor had backed out from appearing on the show at the last moment, triggering speculations that it had something to do with the superstar’s association with another channel.

Apparently, Salman, who is associated with Colors as he hosts “Bigg Boss,” was in news over speculations that he may not appear on Kapil’s new show. The shooting, which was supposed to take place on June 17, was cancelled by Salman’s team. Thus, tongues started wagging that Colors was behind the decision and then Salman’s appearance on “Comedy Nights Live” added fuel to the fire.

But recently, Salman and Anushka appeared on Kapil’s comedy show. According to a SpotboyE report, it was Aditya Chopra’s decision for promoting “Sultan” on “The Kapil Sharma Show.” Salman appeared in black casual outfit, while Anushka looked stunning in a white ensemble. Kapil and other team members celebrated Eid with the actors on the sets as the film is an Eid treat to the audience.

Several pictures from the sets of “The Kapil Sharma Show” have been doing the rounds on social media. From Ali Asgar enacting a begum to Suni Grover playing a young girl, the photos gave a glimpse that it will be a fun episode. Kapil and Salman have always entertained the audience when they have come together on-screen. Even on the last show, “Comedy Nights With Kapil,” the superstar promoted his films “Bajrangi Bhaijaan” and “Prem Ratan Dhan Payo.”

Take a look at the pictures of “Sultan” cast on “The Kapil Sharma Show” here: