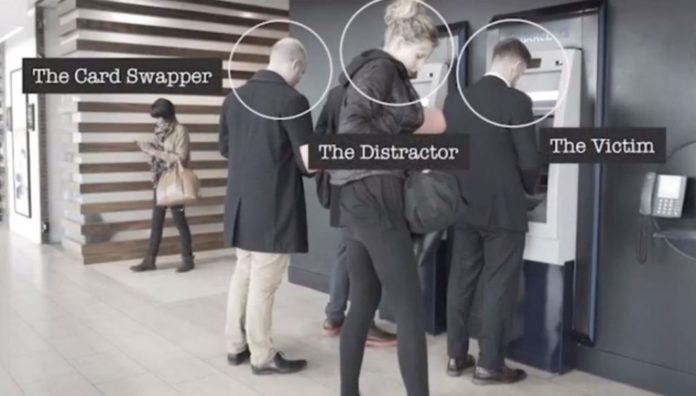 Bank customers are being warned to be on their guard as a new wave of distraction thefts are being staged at cash machines up and down the country.

The scam is over in a blink of an eye, leaving customers unaware they have had their bank card swapped for a fake one and their account at the mercy of the thieves. Barclays has released footage of one customer being scammed as he uses an ATM. It shows a young man inputting his PIN as another man uses an adjacent machine.

A woman behind the victim has clocked his code, then drops some money to distract him. Her male accomplice reaches across, swaps the victim’s bank card for a fake one, and then continues on his way.

The victim returns his attention to the machine, pockets his cash and card and leaves – unaware he’s carrying a forged card while the woman and her accomplice armed with his card and PIN soon set about raiding his account. Fraud at cash machines rose by a fifth to £32.7million in the last year alone, according to Financial Fraud Action UK.

A Barclays spokesperson said: “We are determined to do all it can to combat fraud. We’ve had a media campaign across all of our different channels, direct mails, in-branch posters and ATMs, so it actually just felt like a really natural step to put our weight behind a TV campaign.” Advice from Barclays to stop the scammers:

5 Most Expensive Smartphones In The World [2016]