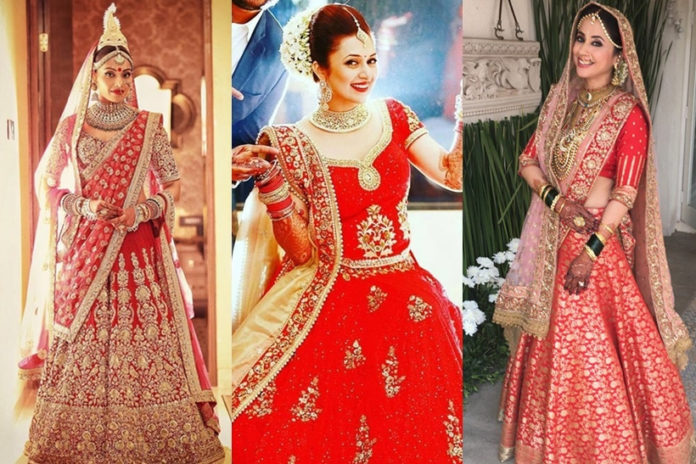 This year has seen a spate of Bollywood weddings, starting with southern belle Asin marrying Micromax founder Rahul Sharma. And when you think weddings, the usual question after the merriment of finding out someone’s getting married is: What will the bride be wearing? Make that a celebrity wedding, and the curiousity to know the tiniest detail about the wedding trousseau is all the more urgent. Which is why it bodes well, in today’s day of social media connect, that our stars and the weddings are so accessible online. Not only that, the series of events that lead up to the D-Day – Sangeet, Mehendi and now pre-wedding shoots – give us a glimpse into what only feel like fairytale weddings — and 2016 has already had its fare share. Here’s looking at this year’s most stunning celebrity brides and what they wore. ASIN: Asin kicked the weddings of 2016 off to a rolicking start with not one but multiple wedding ceremonies. The actress married Micromax found Rahul Sharma in an elaborate Hindu as well as a Christian ceremony. For the Christian wedding, Asin wore a beautiful off-shoulder white gown, with a long veil adorned with flowers. The gown was cinched at the waist, showing off Asin’s beautiful figure, and then opened into a slight flare at the bottom. The long veil added a bit of flirtyness to the look. For the Hindu-style wedding, Asin was wearing a bespoke Sabyasachi Mukherjee lehenga from the ace designer’s bridal heritage line. While her husband Rahul looked royal in a sherwani. The gorgeously heavy gold embroidery transformed the Ghajini actress into a regal bride, and how better to do that than in a Sabyasachi ensemble.

For her reception, Asin opted for a stunning Abu Jani Sandeep Khosla lehenga choli with hand embroidery. She wore her hair down, and paired the ensemble with a stunning statement kundan neckpiece.

URMILA MATONDKAR: The second celebrity bride of 2016 was our very own Rangeela actress Urmila Matondkar, who married model Mohsin Akhtar in a low-key affair in Mumbai. Matondkar made for a pretty bride in a tomato red heavily embroidered lehenga by designer and good friend Manish Malhotra. She completed her look with maatha patti, nath and heavy gold jewellery. Like a true Maharashtrian bride, Urmila also wore green bangles. According to reports, the bespoke lehenga was made for her in just five days! For the evening reception party, Matondkar changed into a white suit with pale gold emellishments. BIPASHA BASU: Actress Bipasha Basu set social media on fire all through her wedding events, because each and every frame looked like a dream come true. Basu married fellow actor Karan Singh Grover in April and the two lovebirds looked absolutely smashing in every frame – be it in the pre-wedding shoot or the glitzy reception with a galaxy of stars in attendance.

Basu seemed to have started this new trending this year of pre-wedding shoots, and we’re not complaining. Many grow up with the idea of a white wedding, and though that’s not always a possiblity, Basu got hers in a stunning pre-wedding shoot where she wore flowing white gown with a huge tulle skirt and a sweetheart neckline. For her mehendi ceremony, Basu went for a Queen of the Forest look, with a beautiful off-white lehenga with a bright pink underskirt, zari border and colourful floral prints. The lehenga had a pink netted overlay, which Basu paired with a heavily embellished blouse. Gold jhumkas and floral jewellery completed the look. Ahead of the wedding, Basu was elegently dressed in a pink sari for a puja ceremony. She was a photographer’s delight with that much-in-love glow and the additional bling of some kundan jewellery.

Looking very much like Bengali bride, Basu chose a stunning red lehenga by the ace designer Sabyasachi Mukherjee. She looked radiant and she knew it. No wonder she put up a note on her Instagram account, saying: “@sabyasachiofficial you are a true magician. The true maestro to make a bride feel like a bride on her special day. I imagined to look exactly like this for my wedding. I can’t thank you enough for both the amazing bridal outfits you made for me”. The entire ensemble had a regal feel to it. Not only was the lehenga heavily embellished, but the blouse – including the three-quarter sleeves that are the latest rage in West Bengal – had heavy gold embroidery that added to the bridal glow. A statement piece choker, jhumkas, red bangles, maang-tikka and nathni completed the look. For the reception, the new bride sported sindoor with a casual hairdo (after all that pinned up hair during the wedding, it’s only fair to let it flow now!). Basu chose a stunning off-white and gold Sabyasachi lehenga for the occasion, paired with Jaipur Jewel statement neckpiece and earrings, and a bejewelled clutch. The flowing netted top gave the bride an ethereal look, while the gold dotted skirt balanced it off with a lighter touch. PREITY ZINTA: Dimpled actress Preity Zinta had a very private wedding ceremony to the US-based Gene Goodman, who is reportedly a financial consultant. Zinta said the photos of the wedding will be sold and the proceeds would go to charity, but a couple of pictures of the actress in a beautiful red Manish Malhotra gown did make to to the Internet. Styled by celebrity stylist Tanya Ghavri, Zinta looked resplendent in the deep red, one-shoulder gown with gorgeous tey sublte floral embroidery, which she paired with chandelier earrings and the traditional choodas added a lovely touch. DIVYANKA TRIPATHI: TV actress Divyanka Tripathi just tied the knot with fellow TV star Vivek Dahiya in a beautiful ceremony in Bhopal. Leading up to the big day were a haldi and mehendi function, a sangeet and a pre-wedding shoot as well. Much like Bipasha Basu earlier in the year, Tripathi too opted for a white wedding look for her pre-wedding shoot. The ballgown dress with a tulle skirt and a V neckline gave the actress a very fairy-tale princess-like look, which was accentuated by the curly locks. Dahiya looked every bit a Prince Charming in his blue suit with a touch of casual having kept his shirt partly open at the top.

For the traditional haldi ceremony. Tripathi chose a beautiful yellow lehenga, with large embroidered kalkis, and a cute puffed-sleeved blouse. For the mehendi ceremony, the actress changed into a pretty pink lehenga, and she let her stunning mehendi do the talking! For the sangeet ceremony, Tripathi was dressed in a gold-and-blue lehenga, with an interesting choli that had an extended gold overlay that gave the whole ensemble a very rich look. The netted neck with the zari neckline acted as a necklace, which she paired with statement earrings. For the wedding, Tripathi was dressed in a resplendent red-and-gold lehenga by Kalki Fashion, and wore heavy gold jewellery. Only days before the wedding, the photograph of Tripathi’s wedding gear was posted by the designer online. But the dress that was discussed was definitely different from the one she wore on the D-Day, and we’re not complaining. The rich deep red of the lehenga really comes out with bold floral block embroidery and a classic neckline in the choli. The heavy gold and red dhupatta added that extra flair. After a bright red wedding lehenga, Divyanka Tripathi opted for luscious gold and maroon ensemble for the reception. Yet again a Kalki Fashion creation, the lehenga had a heavy border with kalkis, but it was the blouse that caught one’s attention. Heavily embroidered with gold threads, it was beautifully contrasted with the net dhupatta that fell gracefully from one side. Tripathi opted for simple jewellery to offset the rest of the dress, and had her hair up in an updo. This was a more traditional look, unlike the other celeb brides this year who literally let their hair down for the reception.

This is what Abhishek Bachchan tweeted on his 10th wedding anniversary...