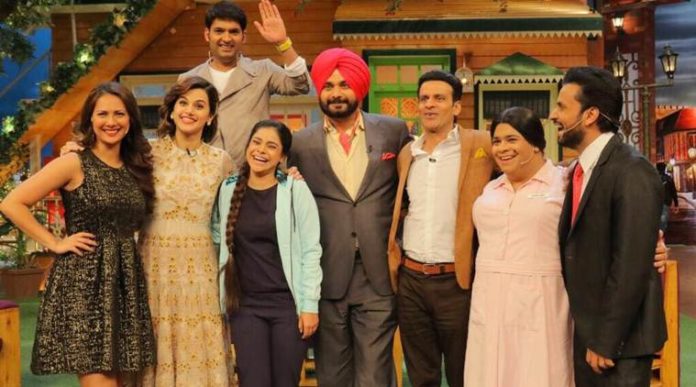 The Kapil Sharma Show’s episode starring Taapsee Pannu and Manoj Bajpayee was the first episode that was shot without Sunil Grover, Chandan Prabhakar and Ali Asgar.

The star-cast attended the show to promote their upcoming film, Naam Shabana. Although the episode was funny in parts but only Kapil Sharma managed to pull the show right. Kapil, along with Rochelle Rao, Sumona Chakravarti and Kiku Sharda, kept coming in different avatars through the show.

While Sumona was struggling to act in the show since she had a terrible sore throat, Rochelle, as always, couldn’t speak a word in Hindi. Manoj Bajpayee managed to be the star attraction of the show sharing funny anecdotes about his favourite co-stars Amitabh Bachchan, Nawazuddin Siddiqui and others.

There were jokes only Kapil could understand and Taapsee and Manoj looked confused. Apart from being the host, Kapil even became the çhacha in his show.

Kapil then went on to say, that Sunil is not in the show because he has gone to Pune for another stage show.

We wonder if we will ever see them together on-screen but together combined, they set the screens on fire. Although Kapil did try hard to make the episode as funny as possible, I will still give it 2.5 out of 5 because there’s no fun without Dr. Mashoor Gulati.

Katrina Kaif said about dealing with her breakup!