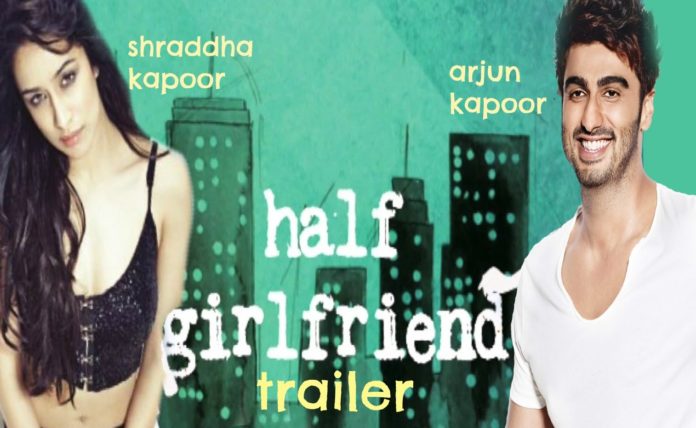 Half Girlfriend trailer opens in St Stephen’s College — pronounced St Steven’s for those in the know. Arjun Kapoor’s Hindi-speaking lad from Bihar, Madhav Jha, is unlikely to know this. Shraddha Kapoor’s Riya Somani, on the other hand, ‘belongs’ to the elite college. When their Hindi and English worlds clash, Chetan Bhagat’s Half Girlfriend happens. The film’s trailer is out and it has all elements to be called a true-blue Bollywood romance drama. The film is an adaptation of Chetan’s novel and directed by Mohit Suri. The 2.4-minute video might not appear impressive in the first half but it is the second half that brings forth the acting skills of Arjun while Shraddha is kept under wraps. The film’s Half Girlfriend, Riya, gets a half-hearted treatment in the trailer. Could it be to keep the suspense around her character alive? We guess so. The trailer belongs to Arjun who seems to be having fun in it other than that one niggle — his Bihari accent is just not working!

Check out the trailer:

Arjun and Shraddha’s romance is sweet but why is there so less of Shraddha in the trailer? And, why from a basketball player she becomes a singer? Why Arjun is searching for her in the streets of London when he is based in Bihar? These questions or confusion can be cleared only when we watch the film on May 19.

The trailer’s USP is the music. Well, you can trust Mohit Suri to give you the best when it comes to background scores. We are sure the moment you will hear the music, you would want more of it.

“I am playing the titular role for the first time, it makes me nervous. It is also for the first time that I am working on a film which is an adaptation of a novel. It is an intense and emotional story, which Mohit is a master at,” says Shraddha talking about her role of Riya Somani. But going purely by the trailer, we see Shraddha doing what she has done before, other than her absolutely killer hairstyles. That, we are digging!

Arjun has earlier spoken about how hard was it to get into the skin of Madhav Jha, and also to play basketball. Though not much of their basketball skills are being showcased in the trailer. And Arjun in some sequences, might remind you of Aditya Roy Kapur in Aashiqui 2. Meanwhile, accolades started pouring in for the trailer almost immediately.

Thank u little brother !!! Means even more coming from someone as honest as u !!! https://t.co/BazeC4pixB

The film is for sure to create a new category of relationship called Half Girlfriend. But are we ready for that? Written and produced by Chetan Bhagat, the film releases on May 19.