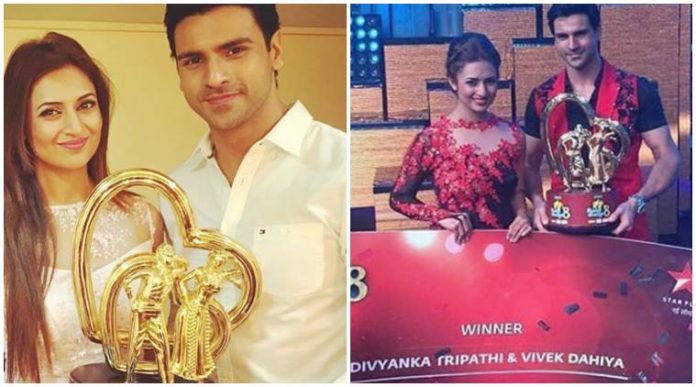 Television’s favourite couple, Divyanka Tripathi and Vivek Dahiya, has more than one reason to be happy about their Nach Baliye 8 win. Not only did their hard work of three months paid off as they beat Sanaya Irani-Mohit Sehgal and Abigail Pande-Sanam Johar in the show’s finale, but the time spent during the shoot brought the couple closer to each other more than ever before. In an interview to the indianexpress.com, the winning couple shared about their Nach Baliye journey, which had its own highs and lows, and why the show is more of a personal experience than a competition.

“(It) has tremendously helped us come closer. In the last three months, we have been promoted by three years in our relationship as Nach Baliye really helped us understand each other better, spend more time with each other and there is so much we have learned about each other,” said the duo, whose chemistry has been loved since the time they walked on Nach Baliye stage. In fact, it was the display of their strong bond that helped the couple sail through mediocre performances.

In the initial phase of the competition, Divyanka and Vivek were appreciated more for being in sync with each other than the quality of their acts. The couple, however, picked their game in the later stages of the show and gave some surprising, solid performances. One thing that, however, remained constant was Divyanka’s fanbase, courtesy her drama Yeh Hai Mohabbatein. It was because of this loyal fanbase that people predicted Divyanka and Vivek would make it to the finals and might even win it. But did the couple, themselves, expect to walk away with the title?

“(We are) pleasantly surprised and thrilled! We are still numb and the feeling hasn’t sunk in yet. We want to thank all our fans and the #Divek family who made this win happen. This journey is not only ours but they’ve been with us in the last three months, staying up at nights, appealing for votes for us and they’ve made it happen! The trophy may shine in our home but it really belongs to all our fans as without their love, support and votes, our Nach journey would have never had such a beautiful culmination,” they replied.

The trophy is OURS, not ours but OURS! Thank you to the #Divek family (each and everyone of you) as it's you guys who have won this trophy! We are grateful to all of you who have voted for us and have been with us in this journey from being nondancers to learning so many dance forms! You appreciated our hard work, saw the challenges we took, and made this happen! #Grateful #Numb #WeWon #Thankyou

Perhaps it is for the relentless hard work that the duo put in that they couldn’t think of anyone else as the deserving winner than themselves. “Each and every couple that made it to the finale was deserving. However, if you ask us then of course our answer will be us and only us.” The newly-married couple is going to celebrate their first marriage anniversary next week, July 8, and they believe the win has made their big day even more special. “It’s a gift from our fans and for us to each other. It’s the most memorable gift one could get on their first anniversary and we will cherish this trophy and win all the more in the years to come,” they said.

OMG! Salman Khan is charging this much for Big Boss 10