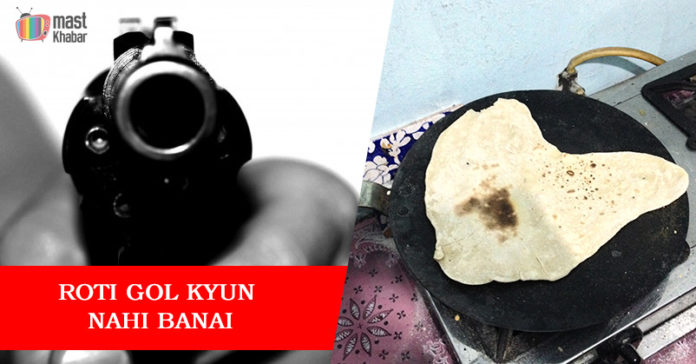 Our mothers always taunt us to cook good food and round chapattis, otherwise mother in law will give taunt. Have you ever imagined that not cooking round chapattis could lead to your death?? Yes people!! This incident happened in New Delhi which will give you Goosebumps where husband killed his own pregnant wife for not making round chapattis. Believe me!! A 22 year old lady named Simran who was also 4 months pregnant was murdered by husband for not cooking perfect round chapattis. This dreadful incident occurred on Saturday night in Jahangirpuri place, Northwest Delhi. However, people came to know about the incident in next morning. Brother of deceased reported police at 4 a.m. about his sister lying unconscious in her house with 4 year daughter found locked in a room. However accused was not found anywhere. Lady was rushed to hospital where she was declared brought dead.

Simran’s daughter said that their parents used to fight on a regular basis and the reason was not perfect round chapattis. She also said that her mother was a good cook but the chapatti shape angered her father. On Saturday night at about 10:30 pm they had a fight and meanwhile the accused kicked Simran in her stomach. When the girl tried to save her mother, father locked her in a room.

Simran and the man were in a live-in relationship for one year after that they got married five years back. The man suffered losses in business due to which he was working in a factory for past years.

Although man was frustrated with his financial condition but killing her wife for not cooking round chapattis is not justified. In fact murdering her pregnant wife is not justified. Are materialistic things or anger/frustration more important than precious life of lady and unborn child? Any answers?

Puducherry Govt: Build a Toilet, Get a Free Ticket for ‘Kabali’

THIS IS WHY SIKH DUO’S BHANGRA ON ED SHEERAN’S “SHAPE OF YOU” IS GOING...