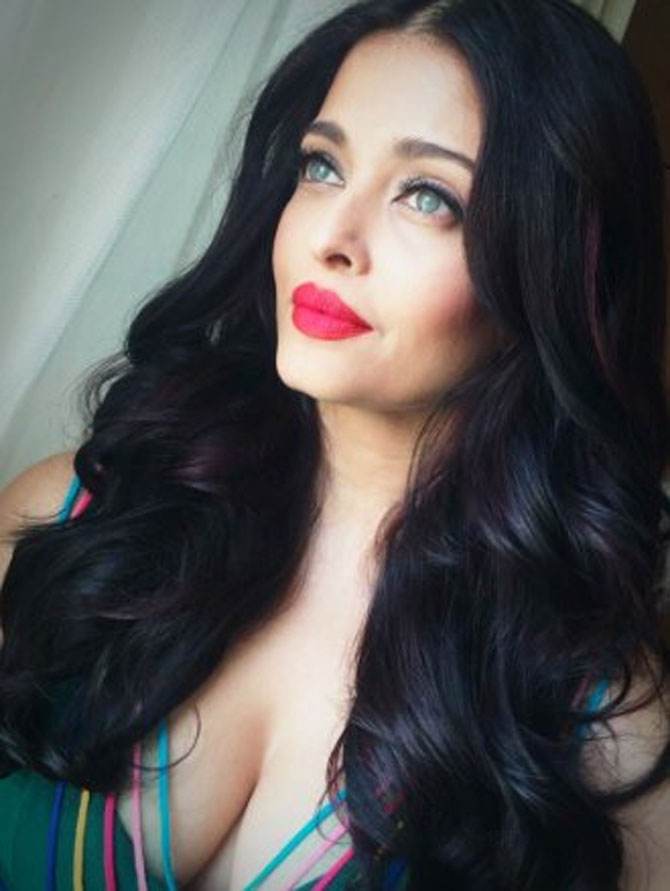 Bollywood actress Aishwarya Rai Bachchan’s first photo at Cannes 2017 is out and the former beauty queen looks mesmerising! Her bold lips steal the show! The actress was seen in a green dress with a plunging neckline.

Aishwarya Rai Bachchan looks ethereal in a Yanina Couture ensemble. She is sporting the L’Oréal Paris True Match Lumi Powder Highlighter in Rose and the Tint Caresse in Rose Blossom blended with Orchid Blossom on her lips. For her eyes, she has applied the La Palette Nude in Rose, Superliner Black Lacquer and the Volume Million Lashes Mascara. What do you think about her look? Tell us in comments below!

Aishwarya Rai Bachchan, who first went to the Cannes Film Festival with ‘Devdas’ back in 2002, will be presenting the Sanjay Leela Bhansali film again at the upcoming 70th edition of the fest.

Aishwarya Rai Bachchan will be walking the red carpet as the brand ambassador on May 19-20.

Recounting her first experience at the fest, Aishwarya said, “We attended the festival not just as artistes but as proud representatives of Indian cinema, and showcasing a film that meant so much to us. The kind of reception we got for the movie was truly overwhelming and I will cherish it all my life.”

Meanwhile, ‘Neerja’ actress Sonam Kapoor will be making her Cannes red carpet appearance on May 21-22.

Cannes 2017: Indian celebs to watch out for at the film festival ‘Bajirao Mastani’ actress Deepika Padukone made her red carpet debut on May 17. She let her hair loose – literally – as she stepped out in a jewel-toned maroon creation by Marchesa Notte for her red carpet appearance at the opening ceremony of the Cannes Film Festival on Wednesday. She walked before the screening of French director Arnaud Desplechin’s “Les Fantomes d’Ismael”.

With her tresses left open, she looked exquisite as she exuded confidence and elan in her one-shoulder floor-sweeping dress. The intricate embroidery lent a traditional touch to the ensemble, while the layering in tulle gave her a sensual look. She teamed it up with Jimmy Choo heels and De Grisogono jewellery — danglers in her ears and a cocktail ring which stood out. Adding a dash of edgy glamour to her look, Deepika sported a bold Plum Blossom lip colour and her eyes were done up with eyeliner and mascara. Deepika made yet another appearance at the gala on Thursday.

Indian actress Deepika Padukone’s second red carpet appearance at the Cannes Film Festival here saw her make a bold statement with smoky eyes in antique green, matched with a bottle green gown which had a thigh-high slit to add the oomph.