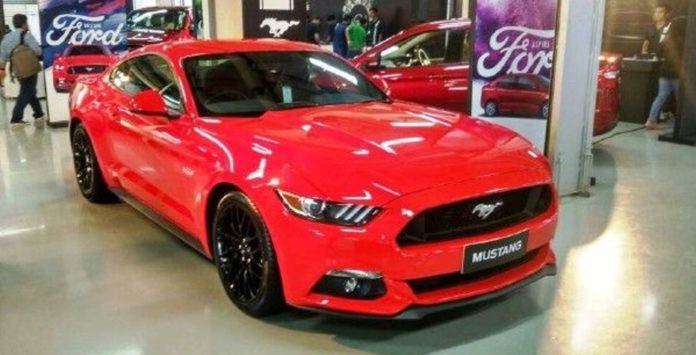 The Ford Mustang, America’s blue-collar hero for over half a century, has officially arrived in India. Having stirred the imagination of many muscle car enthusiasts with the public debut at the Auto Expo earlier this year, Ford India has now launched the Mustang at an ex-showroom price tag of Rs 65 lakh. Now in its sixth-generation, the Mustang has truly become a global product as this very generation marks the availability of right-hand drive configuration (mainly for European markets) for the first time. Compared to its predecessor, the new Mustang gets a lower, wider stance with a lowered roofline. The more steeply sloped windshield and the tri-bar taillights add to the hunkered-down appearance. The Mustang gets all its muscle from a massive 5-litre V8 motor developing 395bhp/515Nm. The India-spec model has been detuned to cope up with the quality of fuel available in the country. All that power is channelled to the rear wheels via a 6-speed automatic gearbox. Sadly, Ford isn’t offering the Mustang with a more desirable manual gearbox, even as an option. These 19-inch wheels not only look the business but also stick to the road firmly, thanks to the Pirelli PZero high-performance tyres. Also, do not miss the fairly massive ‘5.0’ badge on the fender. The Mustang even makes for a mighty good daily driver with all the luxuries including dual-zone climate control, 9-speaker sound system with an 8-inch touchscreen and electric leather seats as standard. What you see here is the genesis – the first Mustang that arrived in 1964. With a base price of $2,368, it was a bargain at that time. The Mustang eventually went onto become a massive sales hit for Ford. The 1967 Mustang was considered by many to be a great highlight for the Mustang design in the 1960s. The 2+2 model went from a semi-notchback to a sweeping full fastback roofline for a sportier stance. Ford is bringing the Mustang to India as a CBU from the brand’s Flat Rock assembly plant in the US. The car is available in six colour options – black, silver, white, yellow, magnetic and the signature red.